Mt.Hood is the highest point in Oregon and also happens to be a ‘potentially active’ volcano… yeah I raised an eyebrow at that phrasing too. It means that the volcano has only an estimated 5% chance of erupting in the next 30 years, which is what a statistician might consider ‘not exactly negligible’. It is a Stratovolcano (or ‘composite’) meaning that the 11,249’ mountain visible East-South-East of Portland was formed by a combination of explosive and effusive eruptions i.e. the ones that go boom and the ones that go lava-trickle/leak, respectively. Mt.Vesuvius was also a Stratovolcano… so just about the obvious place to go for a walk, nothing to worry about here folks, carry on.

We were greeted by a rainbow as we finished the drive up the mountain, minutes later, the clouds began to clear as we embarked on our journey. 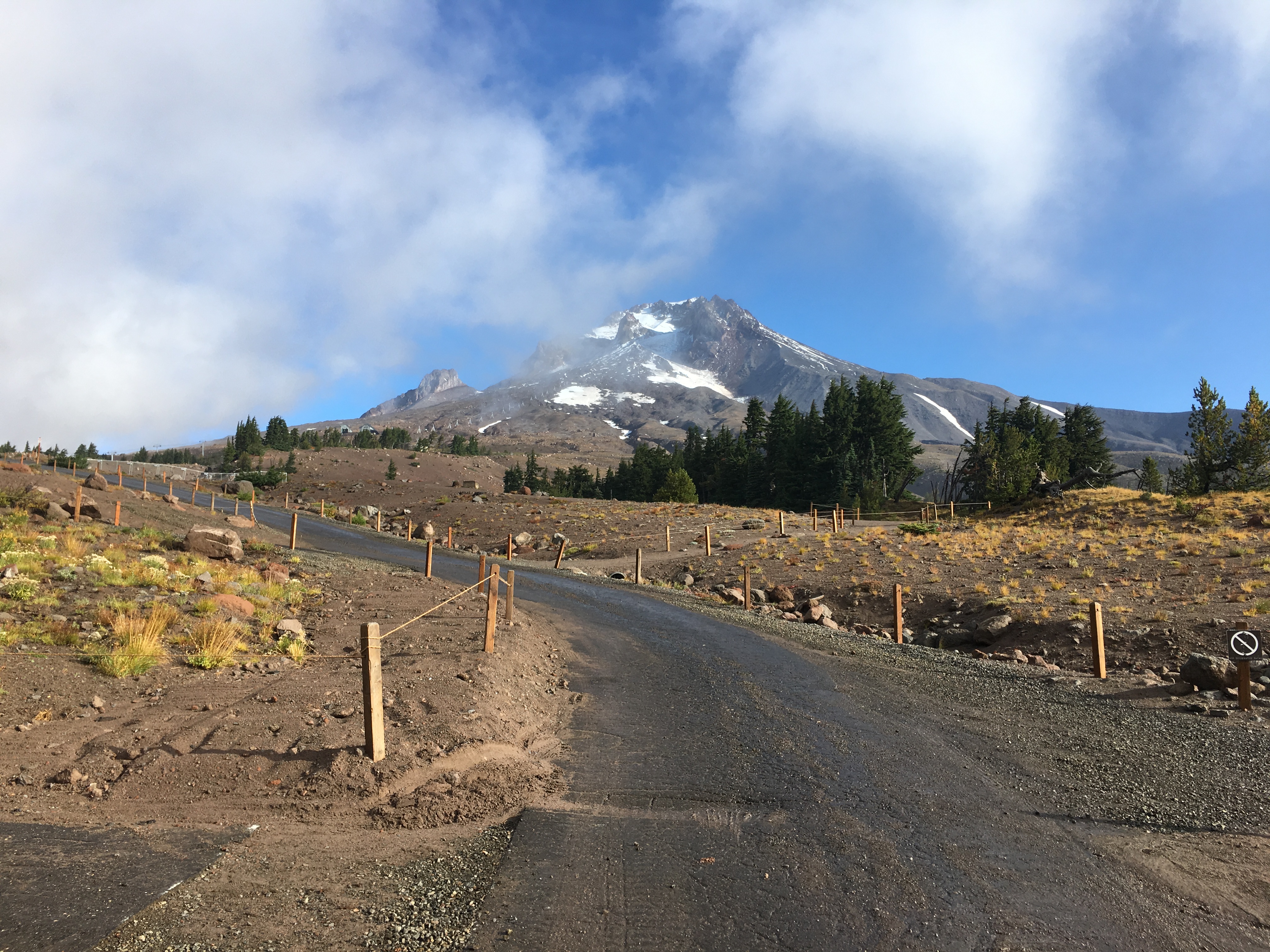 We started Westbound from Timberline Lodge, usually people start off East, likely because you hit the highest point of the trail while you’re still fresh.

The first down and up (altitude-wise, not attitude-wise) is quickly met at Little Zig Zag Canyon. 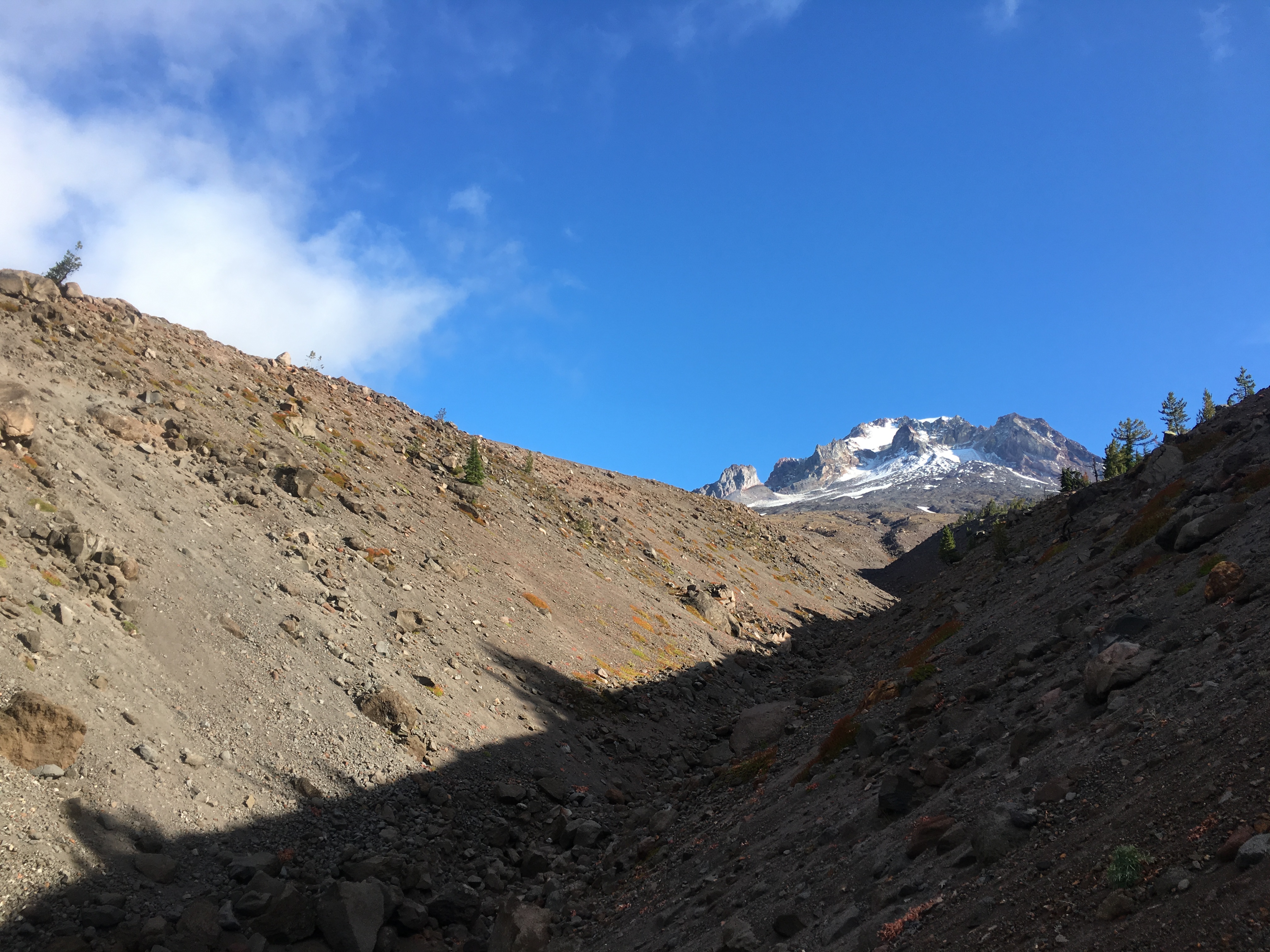 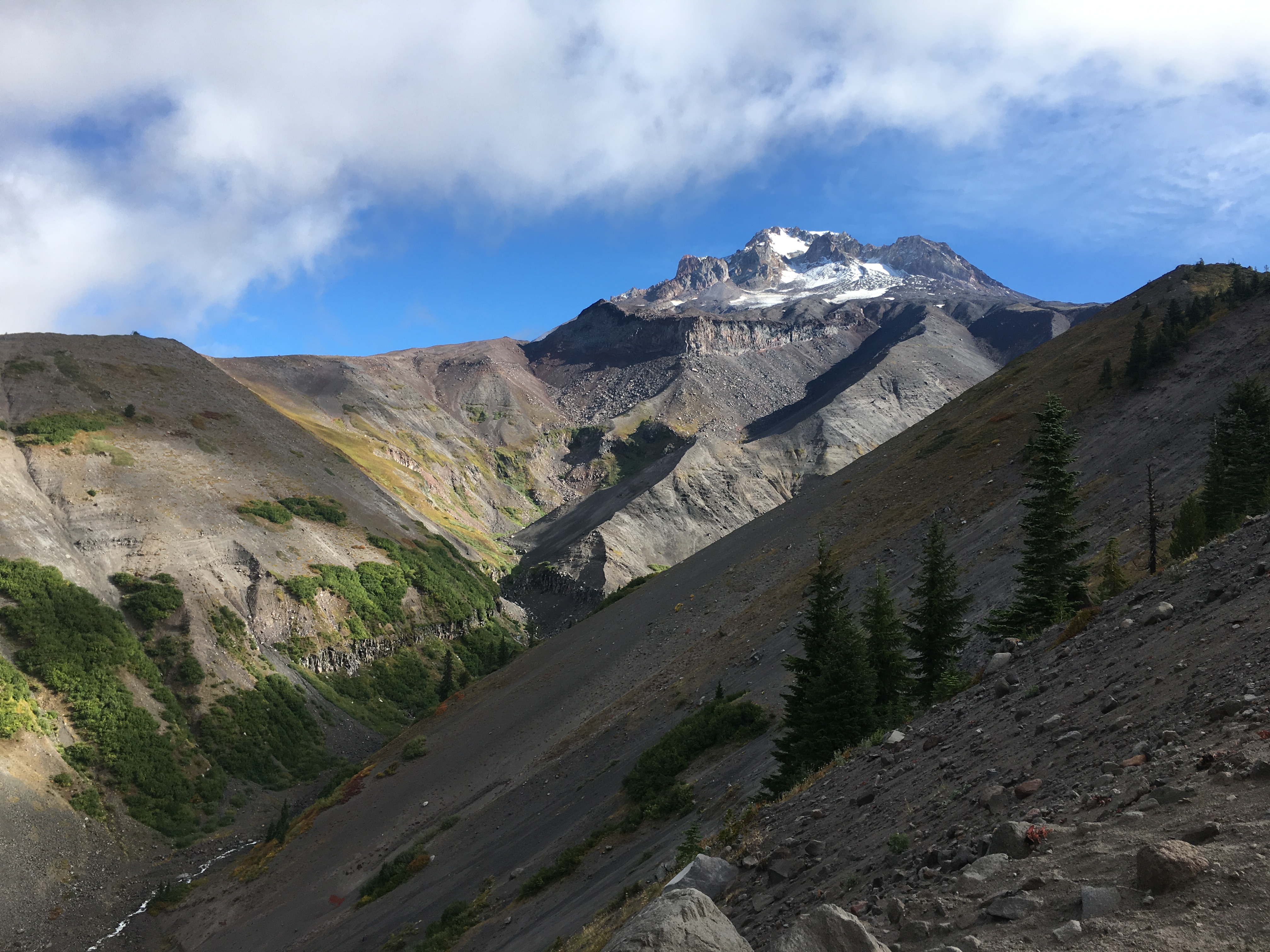 …we descended ~1,000’ to cross the culprit river of said Canyon, before swiftly regaining the vast majority of such briefly lost altitude.

The wildflowers were stunning, as were the views of waterfalls both on and adjacent to the trail – we took care to stay on the trodden paths if venturing off the trail proper since the wildflowers and ecology can be pretty well irrevocably disturbed by the shoe-wearing-apes. 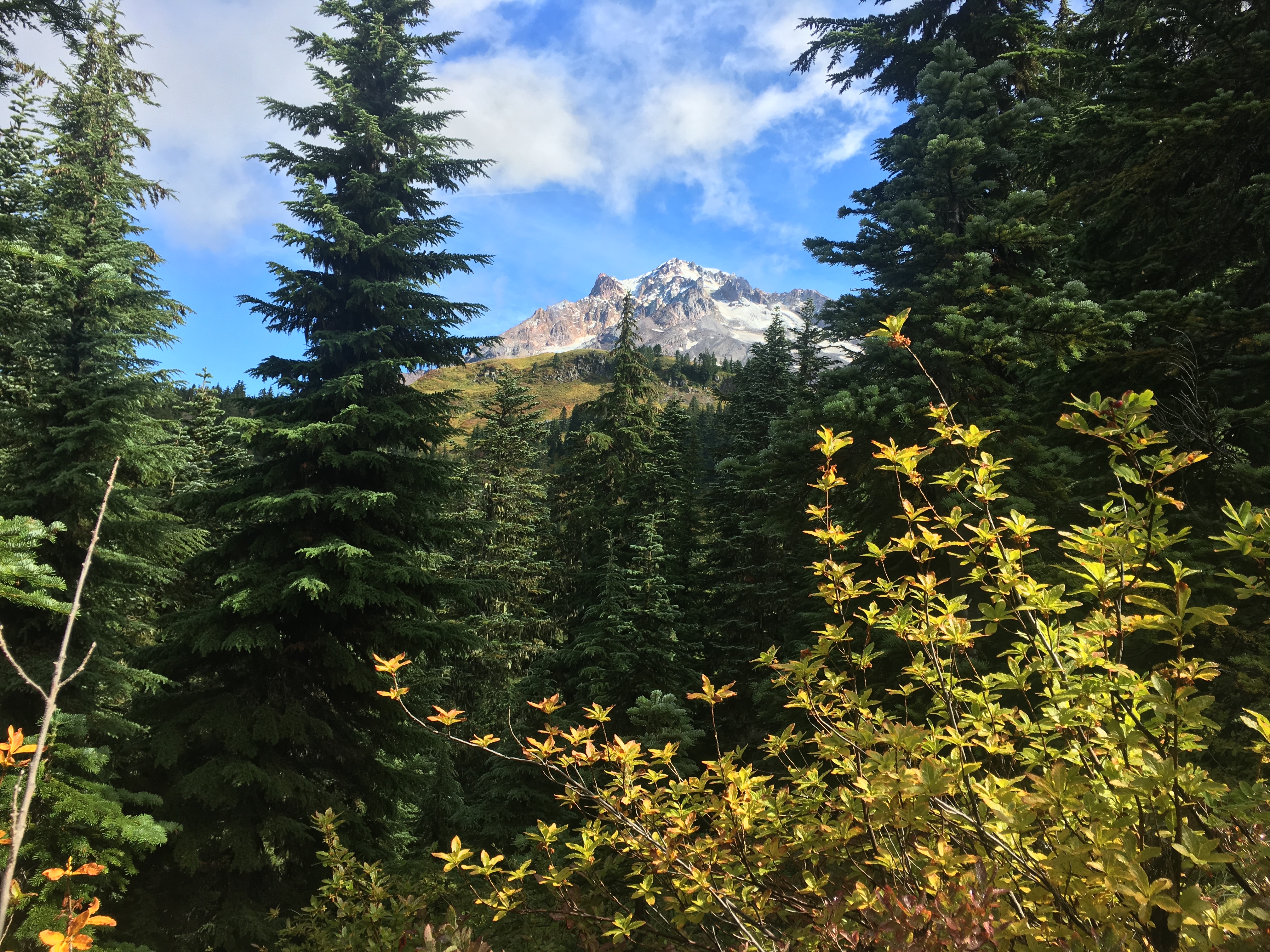 In a couple of pictures here one gets the impression of how quickly the visibility and weather changes around the mountain: 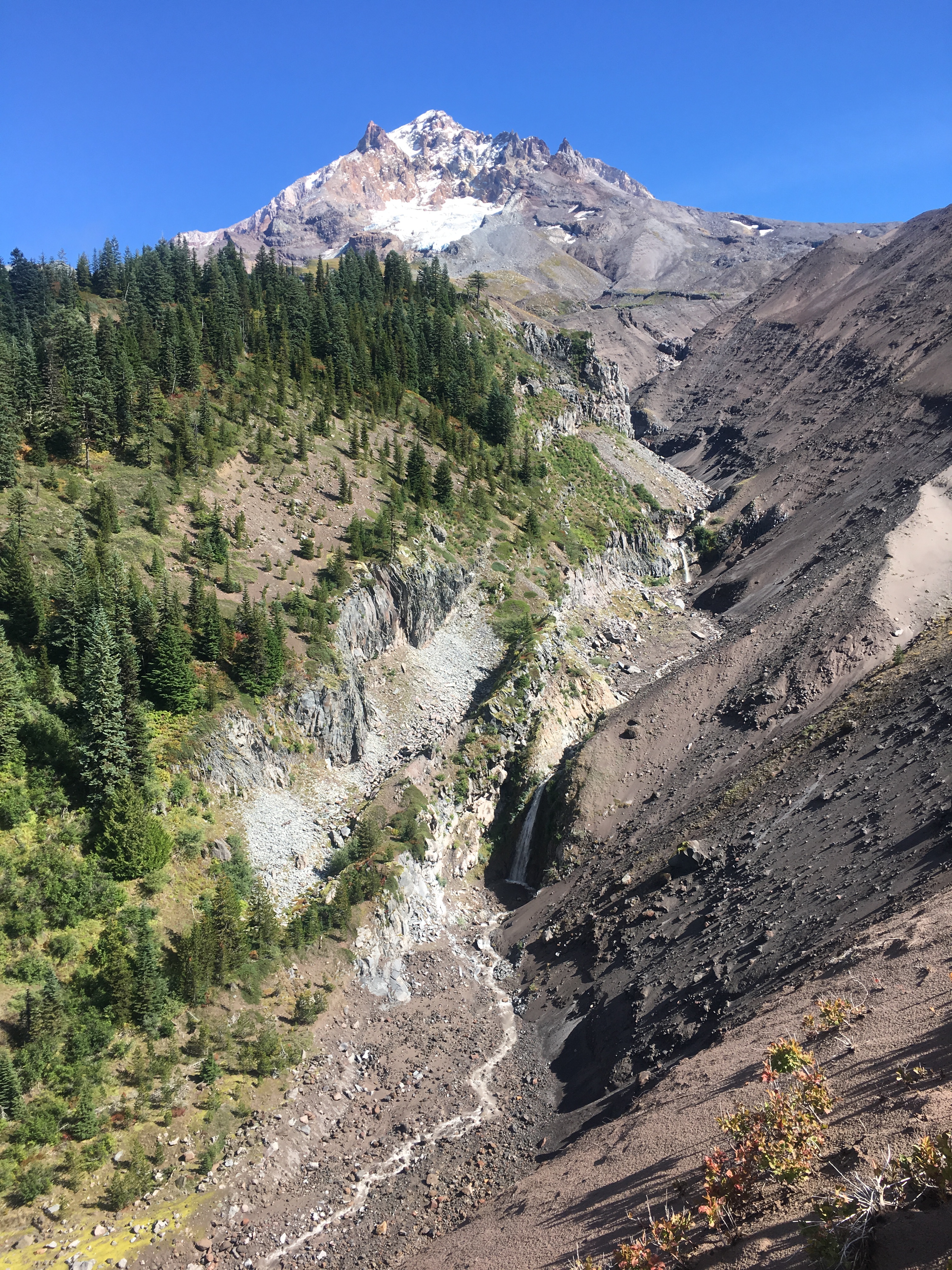 We saw Ramona Falls in a beautiful afternoon light with a rainbow refracted from we’re not sure where exactly, Ramona Falls is at an elevation of 3,500’, we had started the day at Timberline Lodge at 5,960’ and would finish at ~4,250’ having done a reasonable amount of climbing and descending in-between. 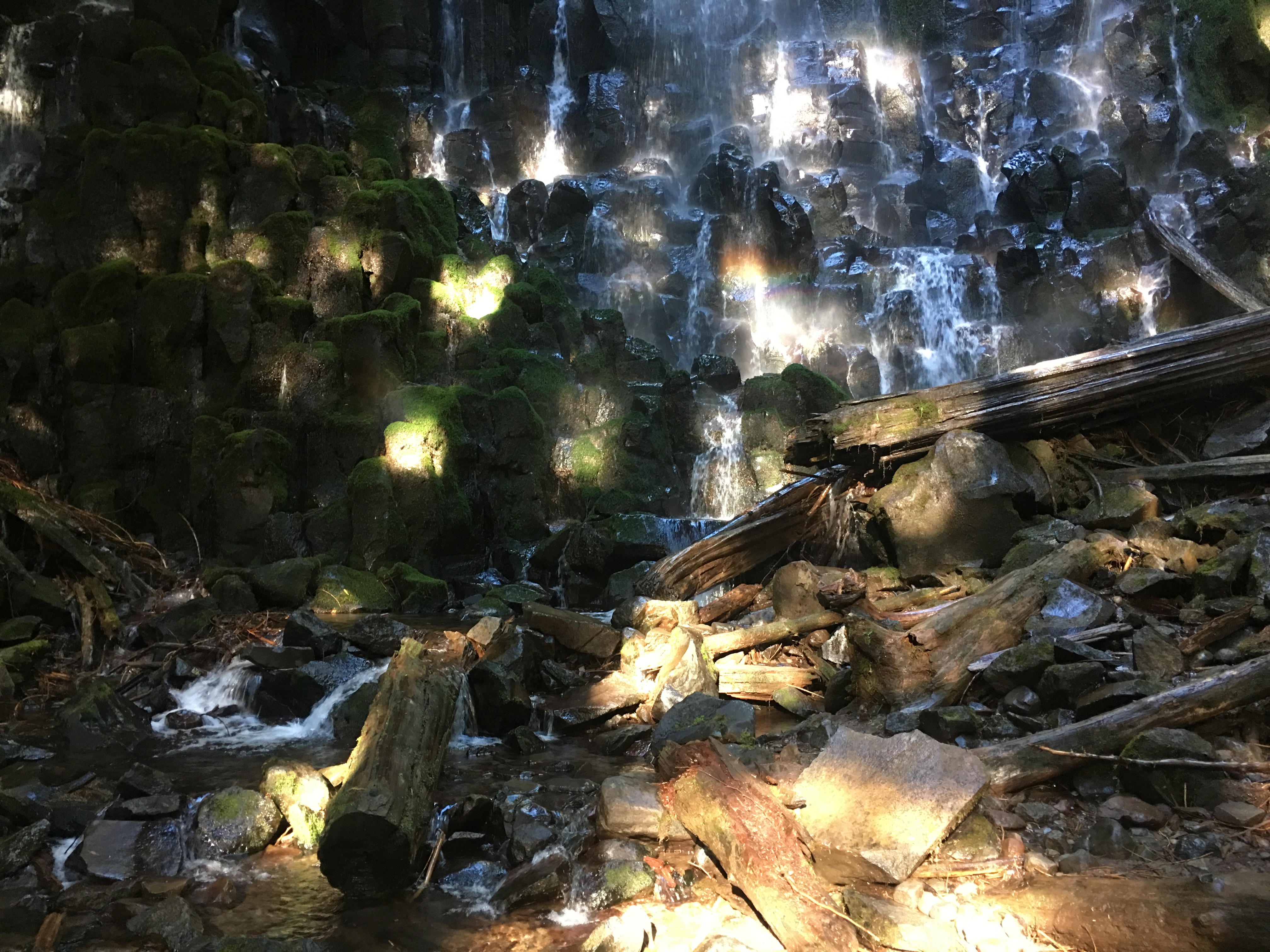 The view from the final ridge climb of the day.

This evening portion of our hike possibly described our deepest foray into the wilderness of the trip. We saw no other people for several hours and had interactions with Chipmunks, Ground Squirrels and one particularly perplexed looking Deer.

Our faces after we saw a large black object emerging from a tree line several hundred feet below the ridge we were in the process of traversing… the object looked as though it had ears, a face capable of making eye-contact, and several other characteristics of a black bear.

Our faces when we realized we had brought the bear-sack and reckoned the bear had no interest in climbing the near-vertical ridge just to eat the smelly ape creatures.

We hiked 14.4 miles on our first day, ahead of the daily average required to make it around the volcano in 3 days, and felt pretty pleased with ourselves.

We started the day with another couple of thousand feet altitude gain over the course of a few miles – flirting with 6000’ pretty well all the way around the North face of Mt.Hood.

We were treated to exceptional views of three other volcanoes in the distance, St. Helens, Rainier and Adams:

The final couple of hours of the day included, a now more or less routine, >500’ descent into a valley and crossing a fast flowing river before climbing back up the other side.

We reached Cloud Cap in the early evening, saw the first road since Timberline Lodge, (which is situated a casual half mile stroll from another Ski Resort) and decided to press on a little further before calling it a day.

The next mile would see another almost 1000’ elevation gain as we climbed to 6810’ and found the Cooper Spur Shelter just as the sun was setting. The views for this final portion of the day were beyond majestic and bordering on surreal.

For reasons that aren’t fully clear to either of us, probably something to do with a sentiment along the lines of ‘we didn’t just carry this tent 30 miles to not sleep in it’, we elected to not use the sturdy looking shelter of stone and mortar…

Instead, we slept here…

Which went fine for about 4 hours before the wind got the better of our resolve.

The stars appearing as we ate our happily re-hydrated dinner, and the subsequent clear light of our galaxy, must have somewhat distracted us from the latent and obvious knowledge that it was going to be a windy night.

The landscape seemed closer to a desert than anything else. Sand was permeating every portion of our tent and brushing our faces as the fabric thrashed in the early morning wind – one of the guy ropes for the tent porch actually snapped in the wind!

And we thusly faced the day at 5am to make coffee in the shelter and enjoy the sunrise. 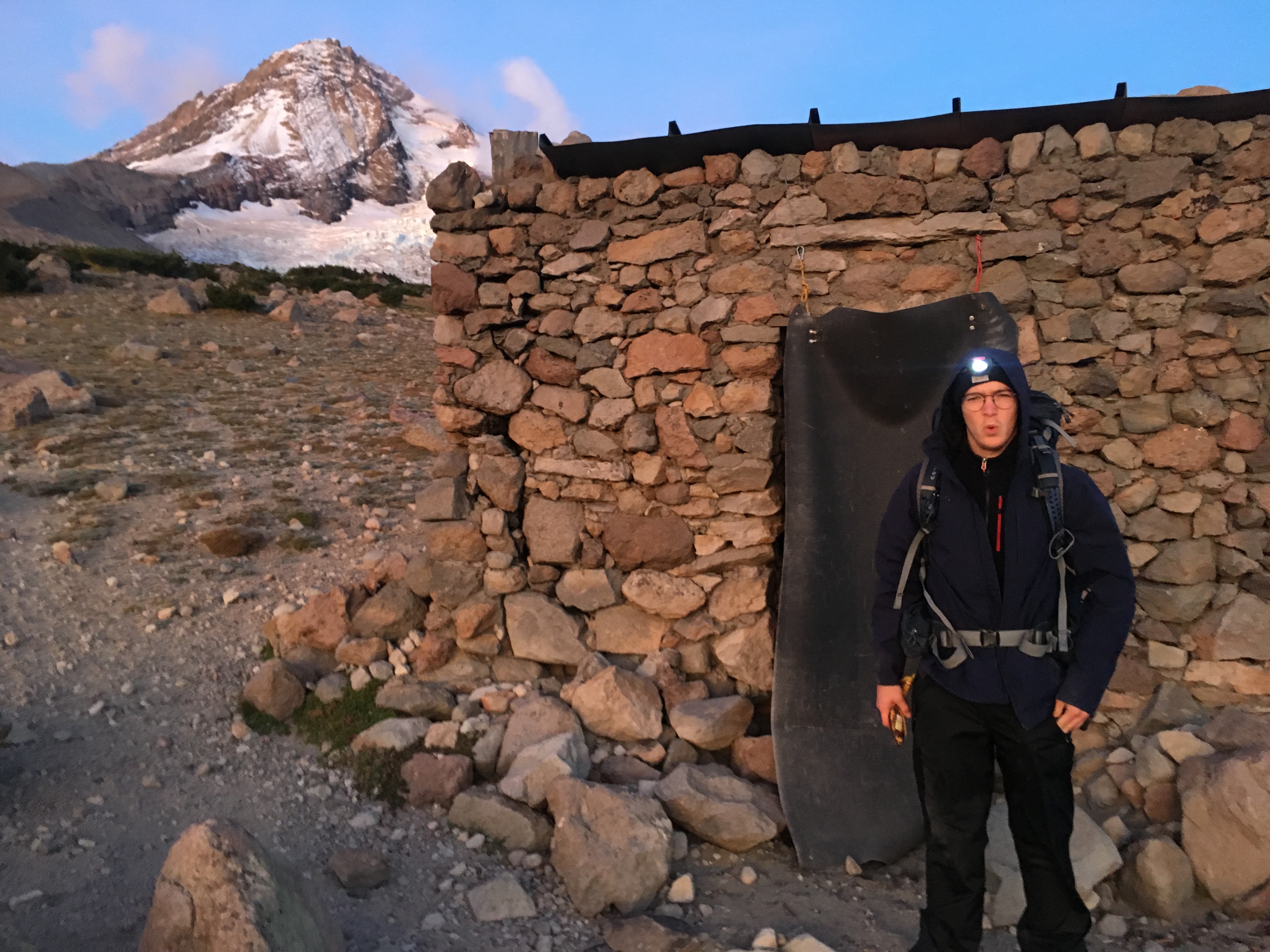 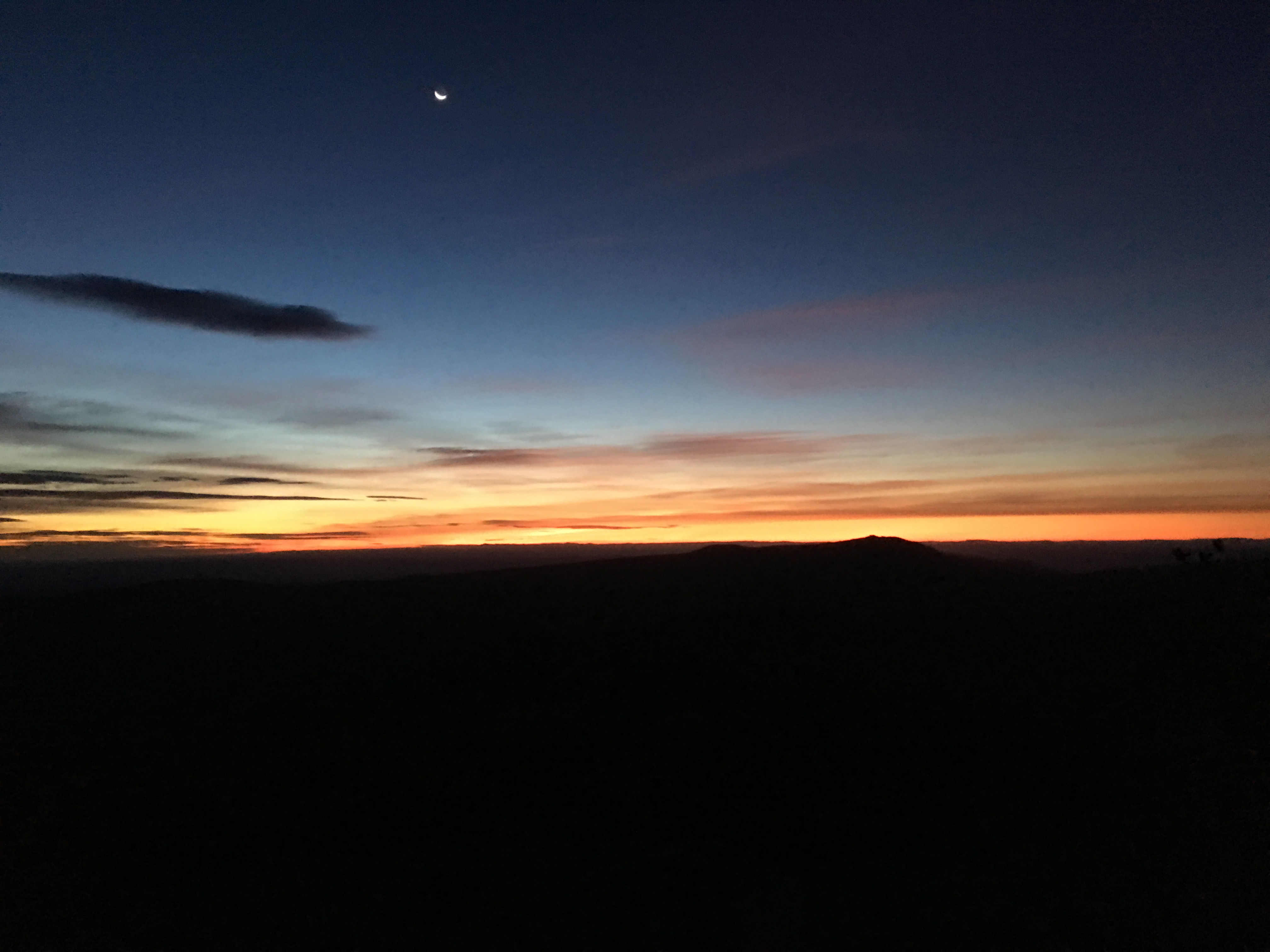 The views of Hood revealed immensely beautiful and varied textures, also we walked across some glaciers. 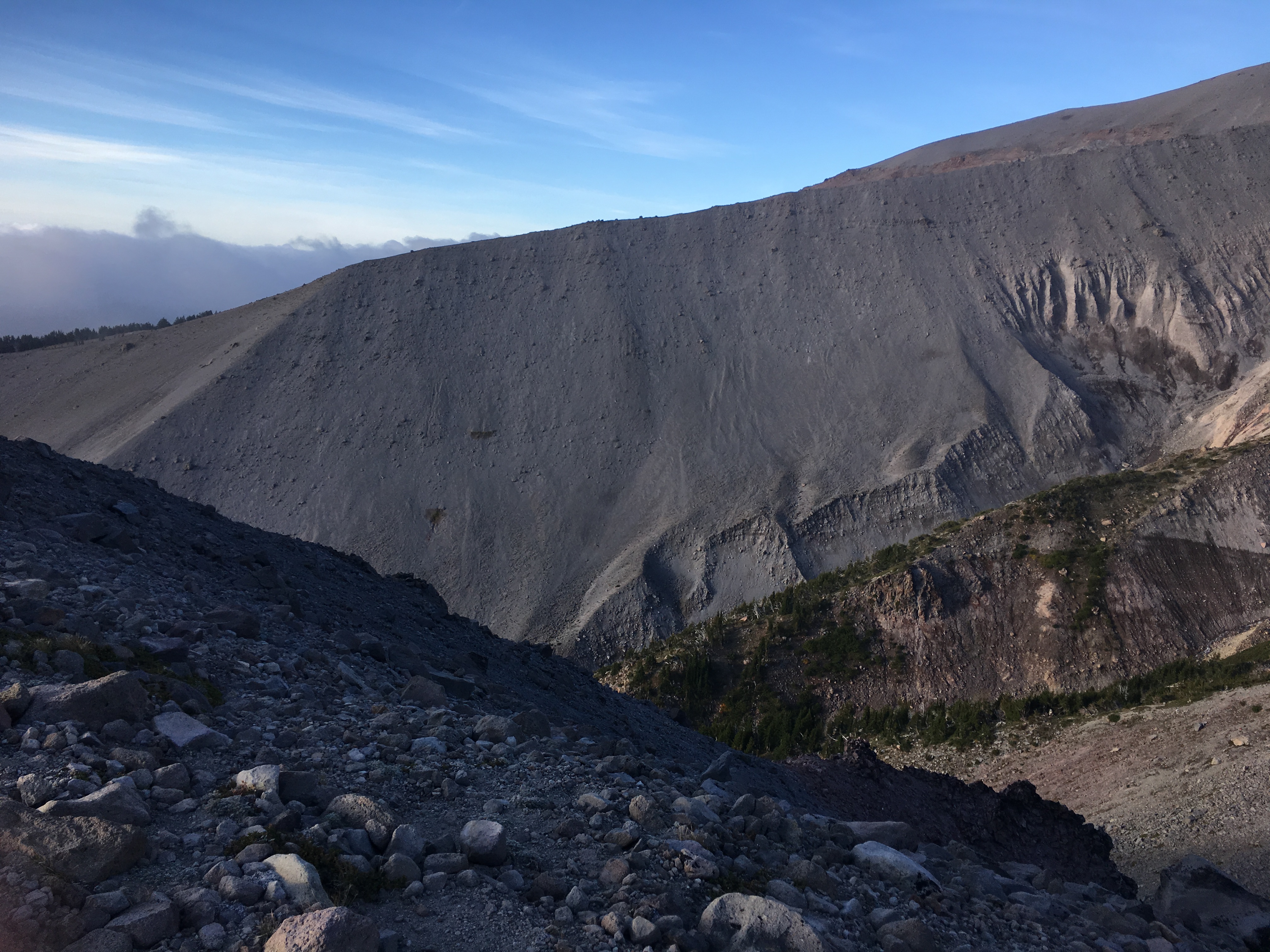 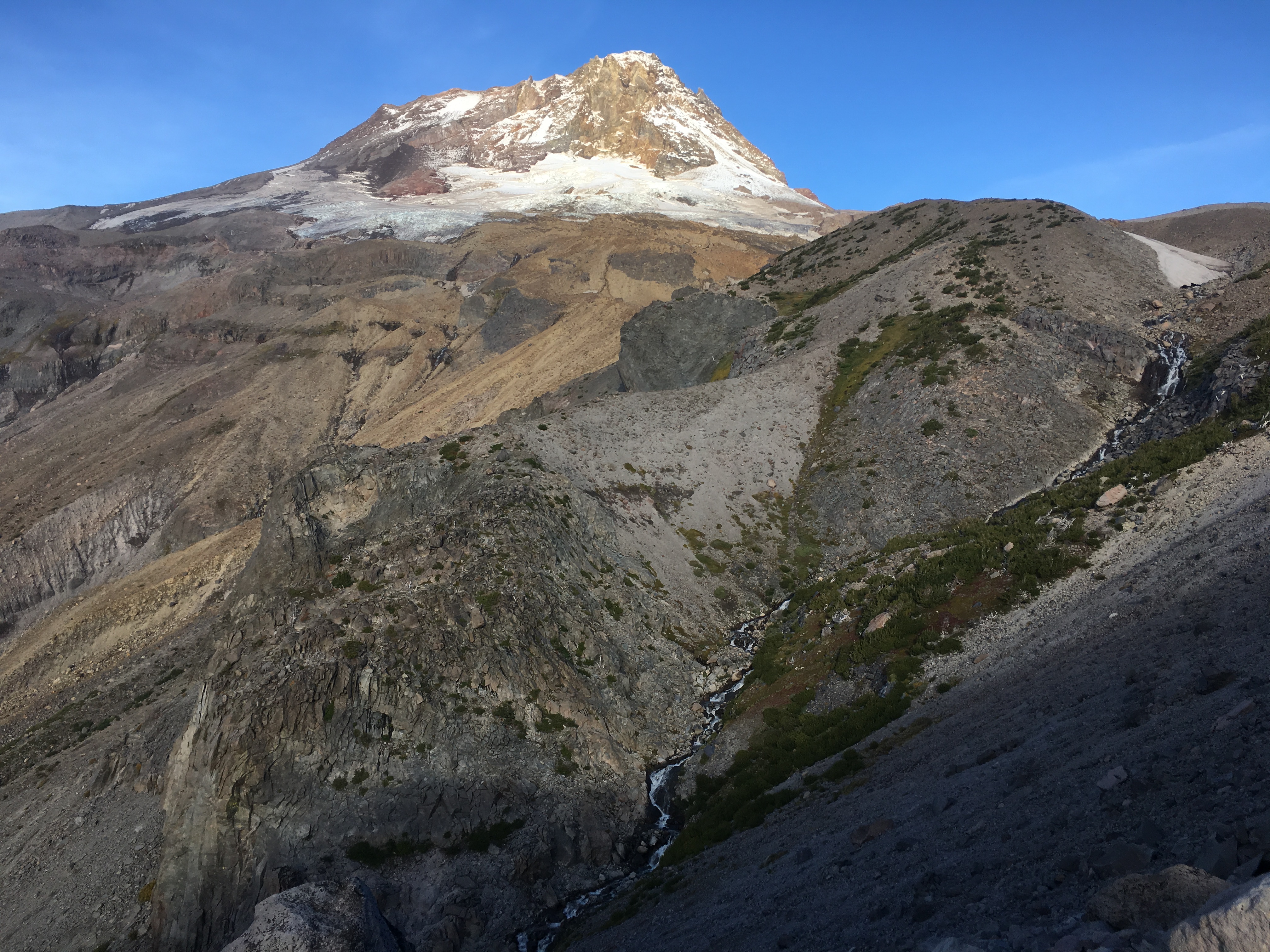 We walked through the Meadows Ski resort and knew we were on the home stretch.

Saving the gnarliest for last, the White River crossing was the last challenge – other than a final 1,000’ climb but those become habitual past a point.

Just look at this picture – you’re ~37 miles in, pretty damp and this is what stands between you and a warm lodge. 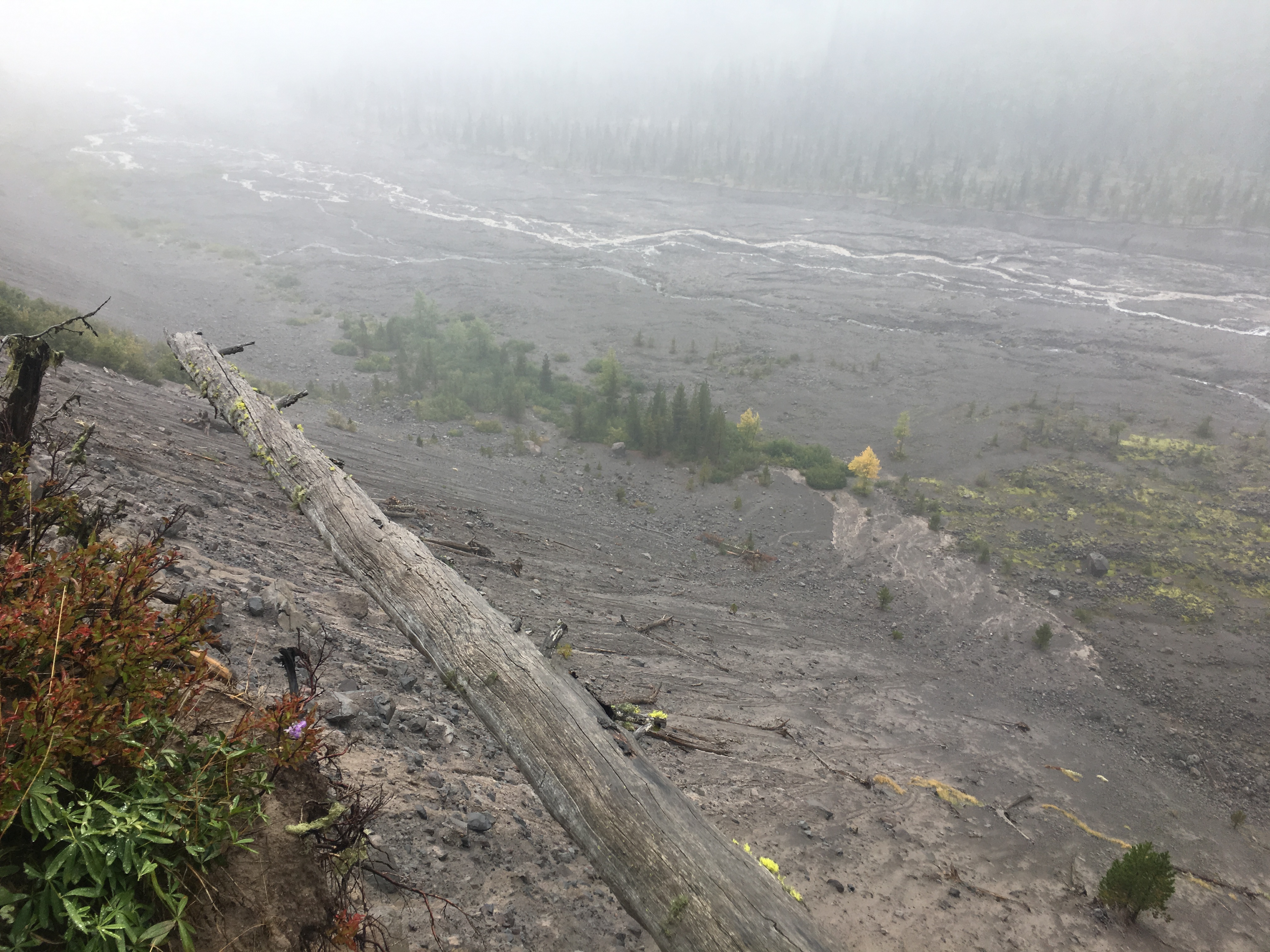 Daunting doesn’t quite cut it.

The landscape of the Mt.Hood wilderness is always changing and we felt this most palpably while trying to find a safe place to cross this river. As we finally approached the river there wasn’t a clear path leading to a relatively-safe place to cross. The banks of the river were up to 10’ high and composed of sand and rocks only very loosely committed to staying where they were. A foot placed on the edge would most likely precipitate the sand falling along with some rocks and oneself if not careful. We found a route down to the water line and crossed, relieved.

I had been looking forward to this hike for a long time so the fairly extensive photo-documentation came naturally rather than by design.

The observation that this trail is considered difficult by most people, not just by those with congenital bleeding disorders, helped me see an opportunity to make this about something more than just my privilege to adventure; with that I thank everyone who donated to raise over $1,000 for Cool Earth. You’re all rock-stars and I thought of you frequently during the hike.

We saw a rainbow as we arrived and one as we departed.

The fundraiser is still live:

Haemophiliac on the Timberline Trail